The Race to the Top

The unsung heroes of many action movies are the fight arrangers who choreograph the action played out by films goodies and baddies.

The two outstanding masters of stunt co-ordinated staged fights are the British born William Hobbs and Yuen Wo-Ping the kung-fu master behind Hong Kongs action movies and over the last decade many Hollywood blockbusters. 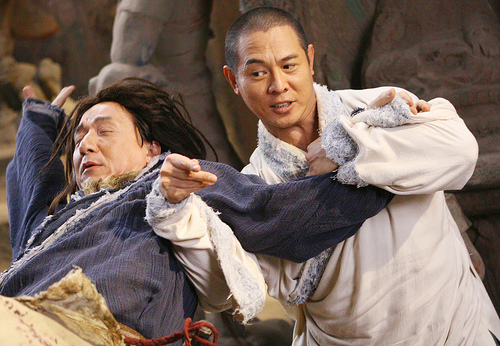 Hobbs and Wo-Ping are the opposites in their fighting styles as anyone can be although their action heros choice of weapons, the sword, is often the same.

Hobbs is routed in western style combat and all his films are period pieces where the heros sword-play is central to the narrative.

Wo-Ping brings a highly stylized form of martial arts fighting that is no longer routed to the ground and has literally taken off to greater heights, notably in Crouching Tiger, Hidden Dragon, Ang Lees crossover movie, which found new fans in the west and took him from art-house to main stream.

Wo-Pings signature wire-style – flying actors through the air in a harness supported by wires – forms the bases of his theatrical kung-fu.

In Crouching Tiger, Hidden Dragon, the actors fight each other with swords as they fly over courtyard roof-tops and bamboo trees exhibiting the grace of dancers and end up facing-off perched high up on bamboo trees as they lunge and twist, swirl and sway their way in eternal battle.

Hobbs on the other hand is routed very much to the ground and is a stickler for only incorporating moves that are found in combat manuals of that period.

He is a traditionalist who insists on historical accuracy and his realistic combats are emotionally charged conflicts where the rules of swordsmanship are adhered.

Most of his films are classic period pieces, which have included a string of successes such as Dangerous Liaisons, Shakespeare in Love, The Man in the Iron Mask, The Count of Monte Cristo and Casanova.

For todays young movie going audience, brought up on video games, these realistic traditional fights that Hobbs delivers are no longer enough to excite them and they demand the action fantasy they have become used to in the often violent video games they play where action heroes can leap into the air with ease and do battle at super human speeds and with limitless moves.

Wo-Ping is the master who can supply these action fantasy fights and after the success of Crouching Tiger, Hidden Dragon, Wo-Ping came to the attention of Hollywood and the Wachowski brothers hired him as a choreographer on The Matrix in 1999.

The Matrix cemented his action credentials in Hollywood with the famous vertical hand-to-hand combat and flying feats he devised for the film.

Audiences were later amazed to learn that these stunts were performed live on set and were not generated special effects (CGI).

The race to perform ever more daring and outrageous fight sequences have left choreographers like Hobbs standing and even the talented Jackie Chan who performs real unbelievable stunts in his movies has resorted to wire work and special affects in his recent films.

Because of this the stunt co-ordinators art of realism is being replaced by more and more special affects where the actors spend their day acting on a stage in front of huge green screens without any sets in a complete void with only their imagination to guide them.